Robot assisted spine surgery utilizes the good things about spinal navigation but significantly increases the accuracy of screw placement into the bone.

Prior to or during surgery, the surgeon can plan where he wants to place the screws based on CT scans that provide 3D visualization of the bones of the spine. The robotic arm then assists the surgeon in placement of the screws as planned on the CT.

Through spinal navigation Virtual Reality, the surgeon can see exactly where the screws are being placed in real-time. The robot not only places screws with very high accuracy, it also makes the surgeon more efficient, leading to less time under anesthesia for the patient and a faster recovery.

Over the past decade or two, robotic surgery has revolutionized many medical specialties including spine surgery.

Early robotic assisted spine surgery was impractical. Generally, these first-generation robots decreased efficiency and were not always accurate, which is a big deal when you're dealing with millimeters.

Prior to robotic assisted spine surgery, fusions were performed by placing screws and rods using x-ray or real time spinal navigation. X-ray worked well, but it was sometimes difficult to know exactly where screws were placed based on X-ray alone.

Spinal navigation, which essentially relies on virtual reality to place screws into the bone by hand, is great but if the machine loses track of where the spine is in space, the accuracy would decrease and may cause a misplaced screw which may not be caught until the patient develops symptoms after surgery.

Spinal robotic technology has improved rapidly over the course of time and is now decreasing operative time and increasing surgical accuracy, as well as helping to make spinal surgery less invasive for the patient. This contributes to better surgery outcomes, as well as faster recovery. 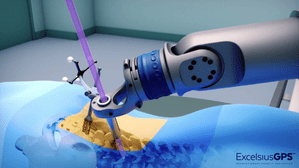 Most of my patients don’t require spine surgery. My goal is to determine the best treatment to relieve the patients’ symptoms. Oftentimes, that involves physical therapy, spinal injections, or a variety of other treatments.

I specialize in minimally invasive spine surgery. The goal of this type of surgery is to preserve the muscles surrounding the spine, as well as the structures of the spine including bones, ligaments and discs. The advantages of minimally invasive spine surgery compared to traditional approaches include shorter hospital stay, faster return to work and less need for narcotic pain medication.