Deep brain stimulation (DBS) is therapy that delivers targeted electrical impulses to the brain to treat different neurologic disorders like Parkinson’s disease, essential tremor, epilepsy, and dystonia. Some people compare DBS to a pacemaker - but for the brain. And while patients can’t feel the electrical pulses, they often have a dramatic impact on symptoms. 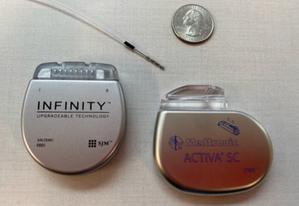 DBS systems also include a wireless patient programmer. You can take the programmer home and adjust your therapy by turning it off or up or down depending on your needs. Your neurologist will help you to choose device settings that work best for your symptoms.

I'm often asked whether DBS is experimental. It is not! DBS has been used in the United States for over 20 years. We have more randomized controlled trials for DBS - the gold standard study in medicine - than for almost anything else in neurosurgery!

DBS has come a long way in the last 20 years.We now have new surgical targets that allow us to treat different neurologic disorders. We also have more sophisticated implants and hardware, including a state-of-the-art surgical robot that I use to implant DBS in a minimally invasive and safe manner.

I implant DBS with a Rosa® robot, which allows me to perform the surgery accurately and efficiently so patients spend less time in the operating room. The robot is an exciting tool, but a common misconception is that surgery is actually performed by the robot rather than the surgeon. In fact, the robot is a tool that the surgeon uses to introduce the electrodes with millimeter accuracy. The robot is like an extension of the surgeon, but it does not actually touch the patient. 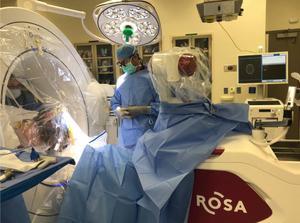 The benefits of DBS depend on the disorder being treated. In Parkinson's disease, patients enjoy better function in terms of their activities of daily living, they tend to have about four or five extra hours of good motor function per day, and DBS also improve some of the motor functions in Parkinson's disease that don't always respond to medicines; including tremor and dystonia.

DBS is also very effective for essential tremor. A general rule of thumb is that DBS is able to reduce tremor severity by about 80-90% in about 80-90% of patients. For many patients, this can be the difference that allows them to write, type, eat and drink without spilling, and perform other dexterous tasks that are important in everyday life.

In epilepsy, long-term studies of patients undergoing DBS suggest that the average patient sees about a 70% reduction in seizures over time. DBS also reduces the risk of sudden death from epilepsy.

One commonality between all of these disorders is that patients treated with DBS report a better quality of life.

DBS surgery can be life-changing for the right patient. The benefits of DBS are in part what motivated me to become a functional neurosurgeon. But despite the promise of DBS, one of the biggest challenges we face today is that most patients who would be eligible for DBS never learn that it's an option for them. And that is what I’m hoping to change with webinars, patient group meetings, videos, and blogs like this one.